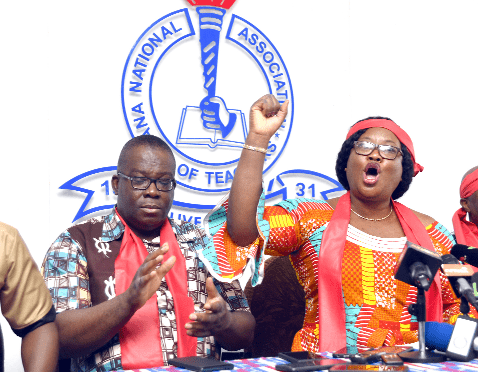 The National Association of Graduate Teachers (NAGRAT), has said the government decision to deny the public sector teachers their salaries from December 1, 2021, if they do not register for Ghana Card is a step in the wrong direction.

Mr Angel Carbonu, NAGRAT President comment comes after the Controller and Accountant General’s Department in a statement copied to EducationWeb.com.gh said the public workers without the Card from December will not be paid.

The Accountant General said the move forms part of a government effort to deliver speedy, secure and verified payroll services to government employees and pensioners while reducing the risk of underserving payments or claims.

“By this notice, all existing and prospective government workers are to ensure they are registered with the National Identification Authority and obtain their identity numbers,” the Controller Department said in the Tuesday release.

But, Mr Angel Carbonu speaking on behalf of other Teacher Unions said the central government directive is not only harsh but one that is also meant to deprive government workers especially teachers of their due for work done.

He speaking on Citi FM’s Eyewitness News show monitored by EducationWeb called on the Government of Ghana (GoG) to rescind the directive citing that the period for teachers to register for the Card is limited.

“We have what we call the workman and compensation principle. The principle states that once it is proven that the workman has done his job, it is the duty of the beneficiary of that job to compensate the workman.

This penchant of threatening not to pay a worker regardless of whether the worker has done his duty to push through a policy is wrong, and it ought to stop,” the President of the Association told the host of Eyewitness News.

He said the National Association of Graduate Teachers (NAGRAT) in due course will engage the appropriate authorities to ensure that members of the Teachers Unions are not disadvantaged as a result of the directive he termed as harsh.

“Why do you threaten me not to pay my salary when it can be proven that I have done the work that I’m supposed to do. So they want to disregard the work that someone has done over the Ghana card,” the President of NAGRAT stated.

Mr Angel who said he is not against the acquisition of the Ghana Card issued by the National Identification Authority said NAGRAT will petition the Controller to stop threatening teachers with non-payment of salaries that they are due.