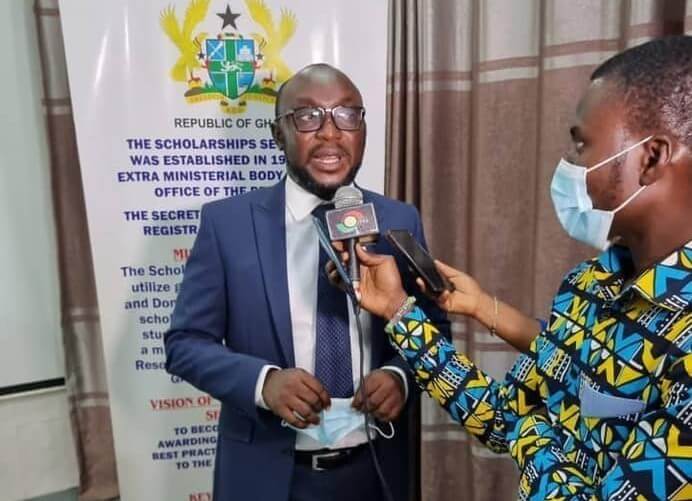 Approximately 55,000 students this year will be awarded tertiary institution scholarships to study various courses in public institutions across the country for the 2021/2022 academic year, Registrar of the Scholarship Secretariat said on Thursday.

The beneficiaries according to Ghana Scholarship Secretariat, Mr Kingsley Agyemang are those that submitted applications to the secretariat through the district level-based online (digitised) system in their respective districts.

Speaking at the launch of the district level-based scholarship application portal in Accra on July 1, 2021, he said GH¢85 million already has been allocated to cater for tuition and other fees for beneficiaries to study at the diploma, degree and doctoral levels.

According to Mr Agyemang, the portal for the 2021/2022 academic year would remain open from Thursday, July 1, 2021, for local tertiary applications and last for a period of 21 days and finally close on July 21, this year.

The tertiary institution scholarship introduced last year saw 233,830 applications submitted to schalarshipgh.com, out of which 113,025 students were shortlisted and interviewed, with 47,000 being offered scholarships.

“The secretariat’s bid to link academia to industry, the Vice-President would soon launch an industrial fair initiative, under which beneficiaries of scholarships would undergo internship training at various One-district, One-factory establishments in their various districts,” he stated.

The registrar furthered scholarship beneficiaries who would undergo the internship during vacation would be given stipends equivalent to what was received by national service personnel.

An applicant would first have to create an account in a web browser at www.scholarshipgh.com, complete the online application form in the system, and undertake an online aptitude test and through the system, after which a code would be generated for him or her.

ALSO READ: IFEST to launch research report on impact of covid-19 on teachers

An SMS alert would then be generated and sent to the applicant indicating where and when he or she would be interviewed in the district.