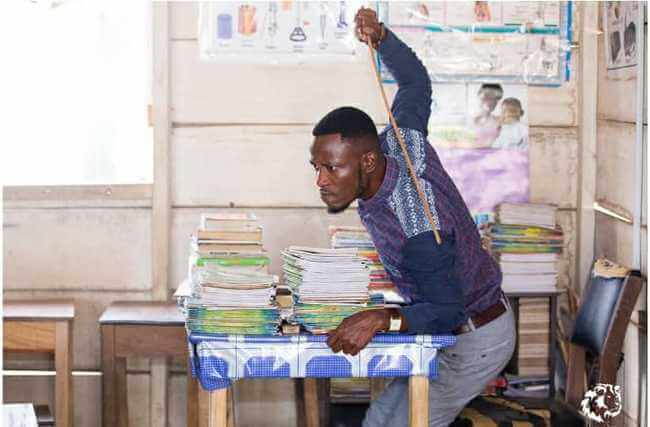 Minister for Education, Mr Osei Adutwum after the Ghana Education Service sacked Micheal Owusu Afriyie popularly known as Teacher Kwadwo over gross misconduct has said the decision was a step in the right direction.

Speaking on JoyNews Upfront show monitored by EducationWeb, the Hon Osei Yaw said the former government teacher was relieved off duty because he violated the rules and regulations of the Ghana Education Service (GES).

Asked if he will intervene for the comedian to be called back to the public sector teaching profession, the Education Minister said No adding that he respect the decision of the Ghana Education Service (GES) Management.

“I have heard of him but I don’t know him and I will not intervene because the GES has their set of rules governing them and their employees. It does matter what he absented himself for,” the Teaching Minister said on Wednesday.

Hon Adutwum comment comes after Micheal Afriyie last year announced on social media the Ghana Education Service (GES) through his District Education Officer issued him a letter indicating he has been sacked from the Service.

“Okay, so for some “professional” reasons I can’t post the content of the letter here but all that is in the letter is that My District Education Office through the Ghana Education Service (GES) says that, they have sacked me

Their reasons are very funny. This is going to be the 1st ever teacher vs GES fight in the history of Ghana Education Service (GES) Y’all relax because it will be all over the news soon and y’all will know the head and tail of it

The letter given to me yesterday is dated “27th October 2021”. Meaning, they have typed the letter a long time and was looking for an opportunity but since they don’t get it, they have given it to me like that,” he said in his post.

But, Management of the Ghana Education Service (GES) in a statement said the former Akrofuom District Assembly Primary School teacher was sacked over gross misconduct and was a subject of disciplinary action long before now.

According to the Agency under the Ministry of Education, the comedian and former government school teacher, Michael Owusu Afriyie absented himself from the classroom on 55 working days in the last academic year alone.

“He also refused to prepare a lesson plan and ignored the directive to the District Director to prepare the lesson plan. He is also said to have further refused to submit Lesson Notes for vetting by his headteacher,” GES said in a release.