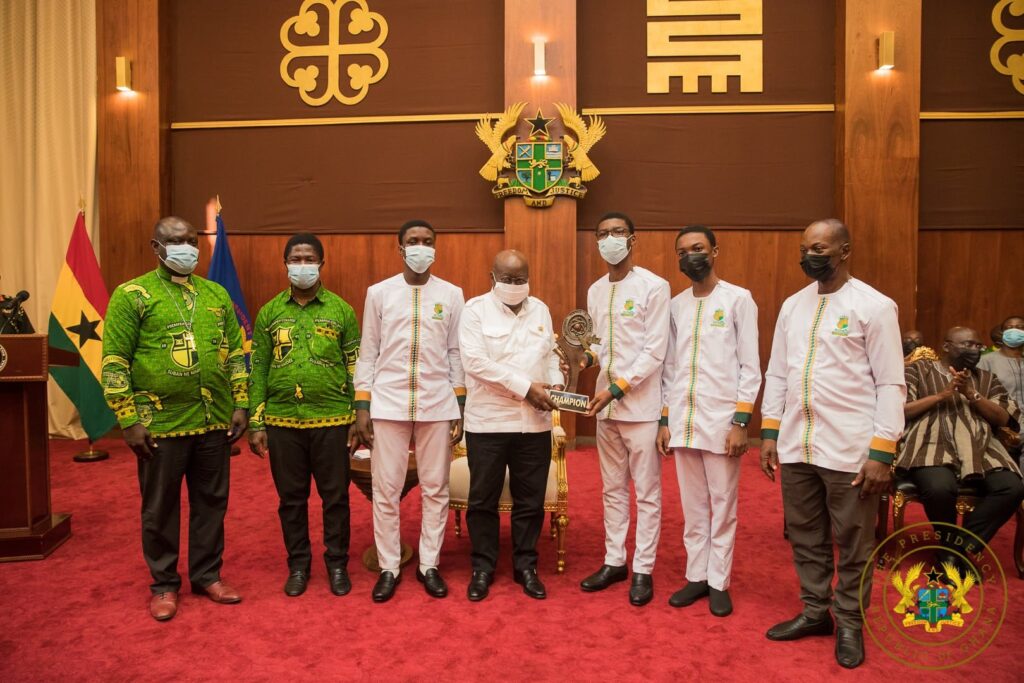 Winners of last year’s edition of the National Science and Maths Quiz, Prempeh College on Thursday, January 6, 2021, presented the 2021 NMSQ trophy to His Excellency Nana Addo Dankwa Akufo-Addo at Jubilee House in Accra.

President Nana Addo in a post sighted by EducationWeb.com.gh said the Management of the Ashanti-Region-based school was in the company of second and former President of the 4th Republic, His Excellency John Agyekum Kufuor.

“The winners of the 2021 NSMQ contest, Prempeh College, were at Jubilee House in the company of the 2nd President of the 4th Republic, His Excellency John Agyekum Kufuor, to present the trophy to me,” Nana said on social media.

The College secured 53 points to win the heated competition while the Legon-based all Boys Presbyterian School (PRESEC) had 49 points and Keta SHTS, the first school from the Volta Region to make it to the final, had 30 points.

In a related story, Former Minister for Education, Dr Matthew Opoku Prempeh following the win has said his alma mater this year will again win the Science and Mathematics Quiz competition to equal the NSMQ record of PRESEC.

In a social media post sighted by EducationWeb, the immediate past Education Minister said “Once again, my beloved alma mater, the prestigious Prempeh College, has lifted the covetous NSMQ trophy, this being our 5th win

It was a thrilling final, and I congratulate our worthy opponents, Presbyterian Secondary School and Keta SHTS, for putting up a gallant performance. In particular, Keta SHTS showed a lot of grit in getting to the final

Our team has made us all proud and I am confident that we will gallantly defend the cup next year, and keep it in Kumasi. We shall equal Presec’s six-win record in 2022 and break it the following year,” NAPO said last year.

Meanwhile, producers of the National Science and Maths Quiz (NSMQ) PrimeTime is yet to communicate to the stakeholders and the general public the date to commence the 2022 edition of the popular quiz competition.