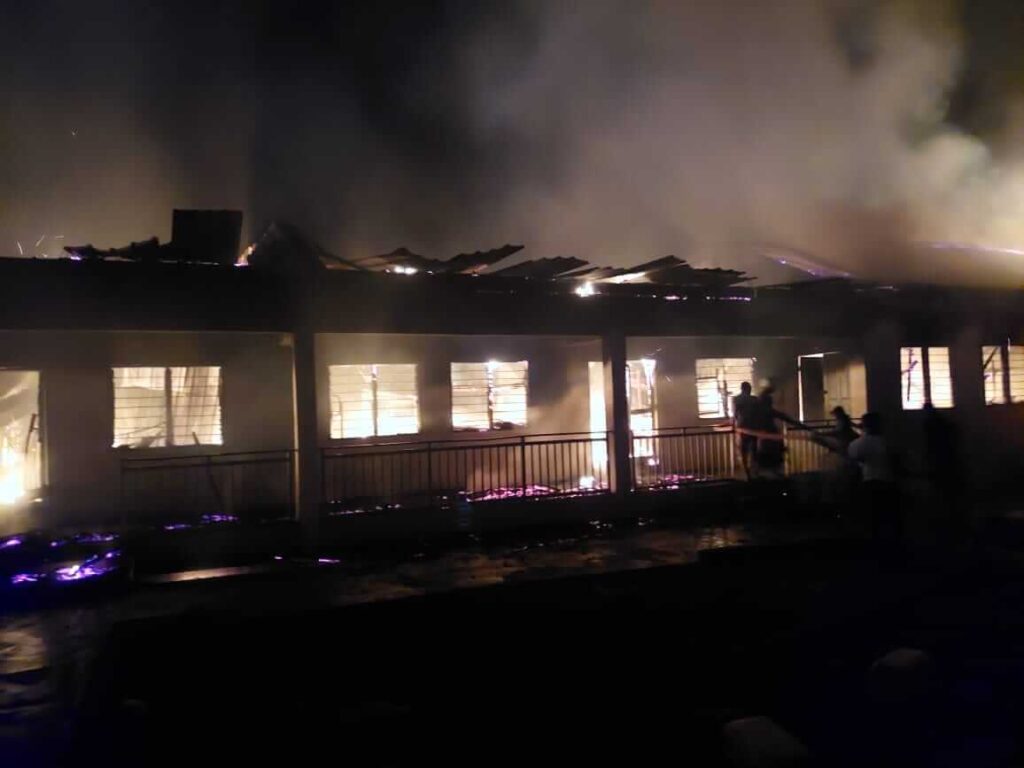 Africa Education Watch following reports that final year students of Nyinahini Catholic SHS allegedly were behind the fire incident which reduced the school’s dormitory to ashes has said the Ghana Education Service is to be blamed.

Some Form 3 students of the Nyinahin Catholic Senior High School in the Atwima Mponua District of the Ashanti Region Friday after the conduct of their last 2021 WASSCE paper reportedly set ablaze parts of the school’s facility.

A source familiar with the matter, Saturday told EducationWeb.com.gh the incident occurred on Friday, October 8, 2021, at about 7 PM, few hours after the West African Senior School Certificate Examination (WASSCE) ended.

Their action, reports say was to register their displeasure over what they claim is the heart-hardness of authorities for not allowing them to cheat in the just ended international examination administered by the West African Council.

According to local media reports, Fire officers who were at the scene to extinguish the fire were also attacked and blocked by the suspected final year Nyinahin Catholic students as they watch the facility burnt to ashes.

The Assistant Headmaster of Nyinahini SHS, Mr Boamah speaking to a reporter said the fire swept through at least eight rooms adding that several items belonging to the Catholic Senior High School have been lost to the fire.

But, EduWatch’s Executive Director commenting on the issue said the GES Ashanti Regional Director ignored the directive to liaise with security agencies to protect school property after the conduct of the last WASSCE paper.

“What did the Ashanti Regional Director do about the directive to liaise with security agencies to protect school property and why did Nyinahini SHS students have a field day in allegedly setting the dormitory ablaze?” he asked.

Mr Kofi Asare describing the incident as disturbing has asked the Management of the Ghana Education Service (GES) to engage the National Security to investigate the cause of the fire and bring to book students responsible.