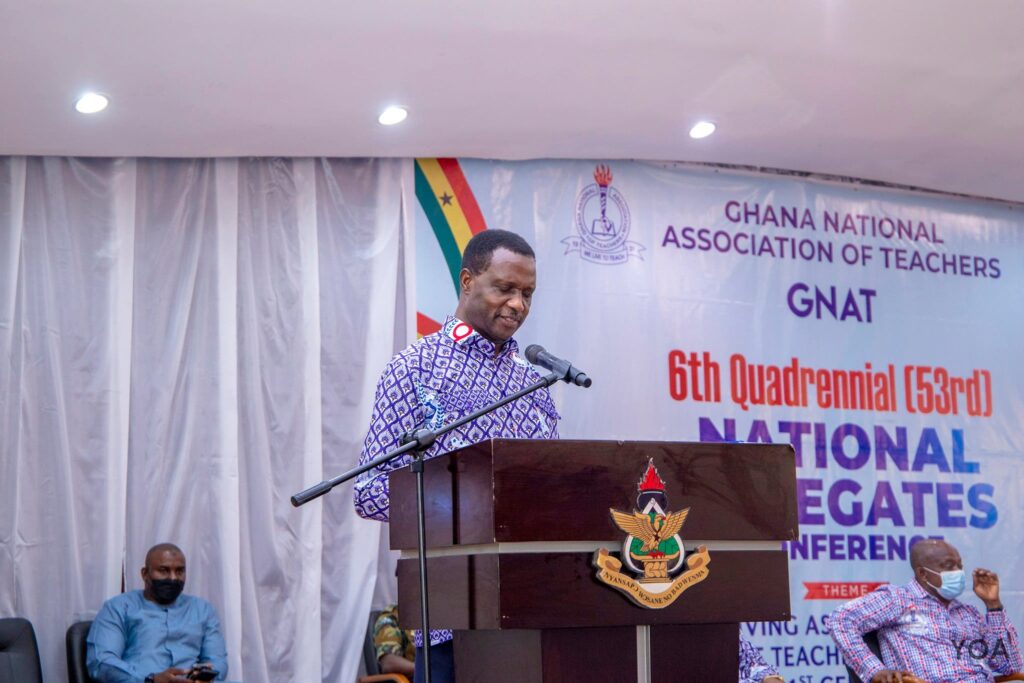 Dr Yaw Osei Adutwum, the Minister for Education after President Akufo-Addo announced to build 10,000 affordable houses for teachers by 2024 has called on teachers to trust His Excellency the promise keeper as he will deliver.

The Education Minister in his address at the 6th Quadrennial (53rd) National Delegates Conference of the Ghana National Association of Teachers (GNAT) said Akufo-Addo is committed to investing in education and teachers.

“I am here today to introduce to you our guest speaker and somebody that I refer to as a promise keeper, he promised to do the impossible to make sure teachers have the best of working conditions,” Dr Yaw Osei Autwum told teachers.

His comment comes after President Nana Addo at the event on Tuesday said the Ministry of Education (MoE) and National Service Scheme (NSS) are working towards a project which will see government teachers own houses.

Akufo-Addo speaking at the GNAT conference held at the Kwame Nkrumah University of Science and Technology said teachers will be provided with an opportunity to own houses in desired locations in various parts of the country.

“Within the next two years, it is proposed that ten thousand (10,000) housing units on affordable terms for both mortgage and rental will be developed for teachers across the country,” the President told GNAT members.

The education President also said his administration as part of efforts to improve teachers welfare has restored and continue to pay teacher trainee allowances, which were abolished by the erstwhile John Mahama administration

For the first time in Ghana’s history, we’re paying professional allowance to teachers. We have abolished the 3 months’ pay policy for teachers, cleared the arrears, and promotions due to teachers have also been affected,” he stated.

His Excellency further disclosed in his address at the 6th quadrennial conference of the Ghana National Association of Teachers (GNAT) said an amount of GH¢40.4 billion has been spent in the education sector since 2017.

The estimated amount President Addo Dankwa said represents an increase of 95% as compared to the GH¢20.7 billion spent by the erstwhile John Dramani Mahama led National Democratic Congress (NDC) between 2013 and 2016.

Addressing the GNAT members, Mr Akufo-Addo commended teachers for their enormous contribution in the education sector to ensure school children are not truncated in the midst of the global coronavirus pandemic