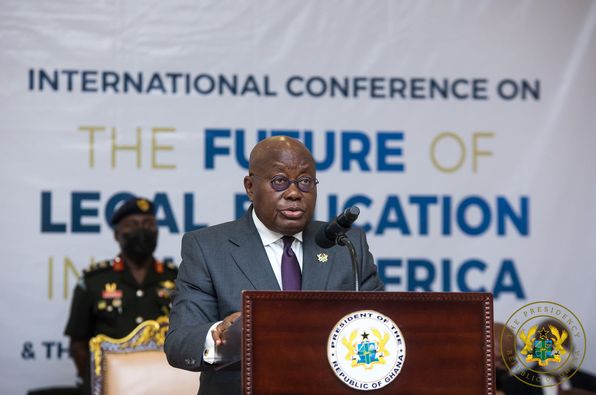 The Ministry of Works and Housing is in consultation with teacher unions to construct about 10,000 housing units for teachers across the country within the next two years on affordable terms, President Akufo-Addo said on Tuesday.

Addressing members of the Ghana National Association of Teachers (GNAT) at a 6th Quadrennial National Delegates Conference, he said the affordable housing units form part of his government’s effort to improve teachers welfare.

“The government is committed to the development of affordable housing for teachers. Teachers will be provided with an opportunity to own houses in desired locations in various parts of the country,” His Excellency Nana Addo stated.

According to him, the Ministry of Education (MoE) and the Management of the National Service Scheme (NSS) are working towards the current initiative that will involve the provision of housing for both mortgage and rental.

“Within the next two years, it is proposed that ten thousand (10,000) housing units on affordable terms will be developed for teachers across the country,” the President of the Republic told GNAT members at the conference.

Mr Addo Dankwa comment comes after the Minister for Works and Housing, Francis Asenso-Boakye last year indicated a proposal for the construction of teachers affordable housing units has been submitted to the Ministry of Finance.

Francis Asenso-Boakye in a post sighted by EducationWeb.com.gh said a committee chaired by the Deputy Minister for Works and Housing, Hon Abdulai Abanga has been tasked to work on the financial proposal of the housing project.

An address read on behalf of the Accra Regional Minister, Henry Quartey at the 53rd Greater Accra Regional Delegates Conference of GNAT also said the housing project is to motive and improve the general conditions of teachers.

“It is significant to note that an agreement has been reached between UNOPS (United Nations Office for Project Service) and the government for 100,000 housing units to be constructed for teachers,” the address stated.

But, government teachers reacting to the promise and assurance of the Commander in Chief of the Ghana Armed Forces have described it as a mere political talk and other cheap tactics to score some political points for his party.

According to the aggrieved teachers, the only best way the central government can improve their welfare and condition of service is to duly pay allowances owed to them and put measures to address their concerns swiftly.

A teacher identified as Kwame Fosu Julius on Facebook asked “How much is he going to deduct again from our salary with this new housing project?. David on his part said, “teachers have more pressing issues than housing units.”