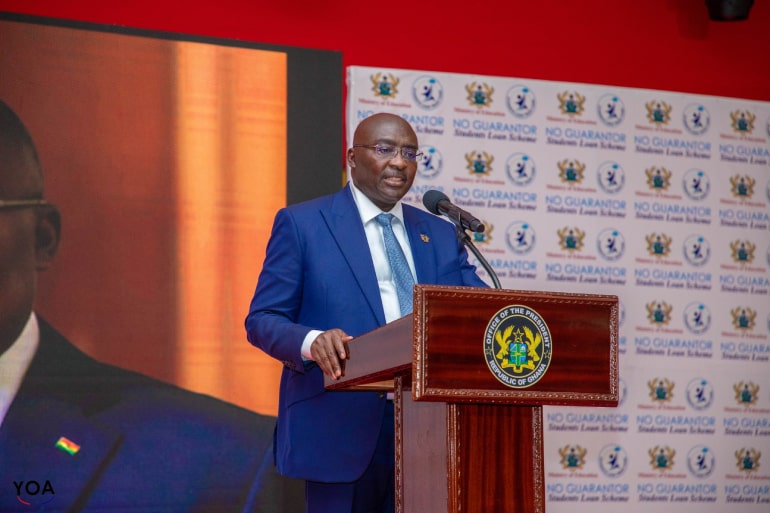 The government on 8th June 2022 launched the no guarantor loan policy expected to remove the requirement for loan applicants or tertiary students to present guarantors before accessing the loan at the College of Engineering, KNUST.

The no tertiary students guarantor policy which was recently slated to be launched on Monday, December 20, 2021, at the KNUST School of Business was suspended until further notice due to circumstances beyond government control.

“We are very sorry to inform you that the official launch for the ‘No guarantor student loan policy’ has been postponed until further notice due to circumstances beyond control,” NUGS said in a press release copied to EducationWeb.

But, following the approval of the no guarantor loan policy by President Nana Akufo-Addo early this year, Vice-President Dr Mahamudu Bawumia Wednesday officially launched the scheme for students to be granted loans.

“The No Guarantor Student Loan, the cumbersome and restrictive scheme of students providing SSNIT contributors as guarantors before they could access student loans for tertiary education, has been abolished

The No Guarantor Student Loan policy makes it possible for qualified young Ghanaians to access loans to fund their tertiary education, using their Ghana card,” Dr Mahamudu Bawumia stated at the launch of the loan scheme.

Dr Yaw Osei Adutwu, the Minister for Education a meeting with the management of the Kwame Nkrumah University of Science and Technology (KNUST) said the policy has been passed into law by His Excellency Nana Addo.

The Minister for Education at the meeting told relevant stakeholders and the Authorities of the Kumasi-based KNUST that the no guarantor policy forms part of the government’s effort to improve access to education in the country.

“The good news is that Nana Addo gave the approval for what is called the ‘no guarantor policy’ which is now the law of the land, which means students can apply for loans to be given the money without a guarantor,” Adutwum stated.

A spokesman for the Education Ministry commenting on the policy launch said the scheme will remove barriers in loan acquisition to facilitate the provision of equal opportunity to everyone who wants to have access to higher education.

“This removes the requirement for loan applicants to present guarantors before accessing the loan. This will enable much more students to access the loan, especially needy students,” Kwasi Kwarteng said in a social media post.

To qualify MoE’s Opoku Mensah said one must be a Ghanaian with a Ghana Card, an E-zwich Card, and also provide proof of admission letter from an accredited tertiary institution in the country with an accredited programme.

“So if you are a Ghanaian student with the necessary documents including Ghana Card, E-zwich Card, and also an admission letter from a tertiary institution you can submit your application online at www.sltf.gov.gh,” he said.