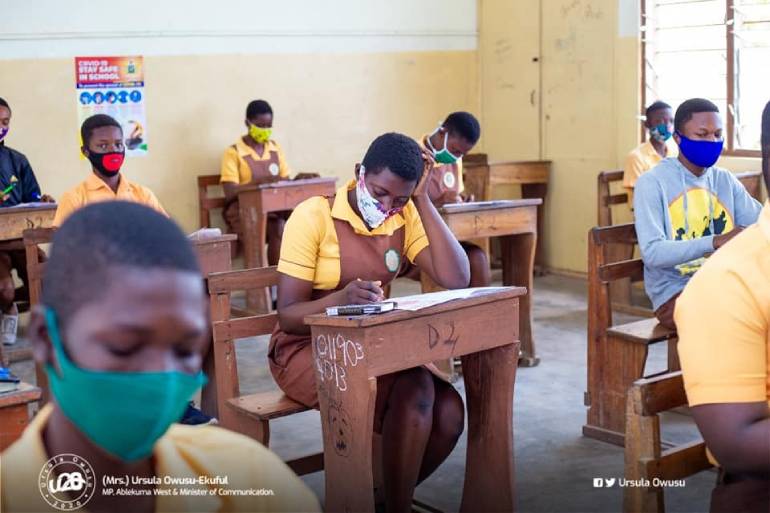 The Mfantseman Municipal Education Directorate following the incident of a female candidate who defecated on herself during the conduct of the just-ended BECE for School has said they will visit the victim and render an apology.

The Municipal Education Director, Mr Cobbod speaking to EIB Network’s Central Regional Correspondent, Yaw Boagyan said the invigilator who denied the candidate permission to attend the nature’s call was not at fault.

According to him, the invigilator contracted by the West African Examinations Council (WAEC) to supervise the examination was only applying the rules and regulations governing the administration of the BECE for School.

“We can not blame the invigilator for what happened, the thing is it is against the WAEC and GES rules to allow prospective candidates to go out of the examination hall less than 30 minutes after a paper has commenced

The invigilator assumed that the student was faking her situation hence his decision to prevent her from stepping out leading to the unfortunate incident. He clarified that students can go out 30 minutes after a paper has started,” he said.

The Mfantseman Municipal Education Director told the Excellence in Broadcasting (EIB) journalist his outfit at the appropriate time together with the WAEC invigilator will visit the parents of the victim and render an apology.

But, the Executive Director of Africa Education Watch, Mr Kofi Asare has asked parents of the BECE graduate from Beifikrom Basic School to file a lawsuit against the invigilator who denied their ward permission to go out.

“And what will the invigilator even suffer, apart from the GH 15-20 invigilation fee which is paid after 10 months? Under the current WAEC Act, nothing more can happen to the invigilator. The parents of the girl must sue,” he noted.

His advice comes after media reports said the invigilator at the Mankessim SHS examination centre despite pleas by some teachers refused to permit the student to attend to nature’s call, a situation which made her ease herself.

According to the report, the female student of Beifikrom Basic School was forced to write the 2021 Basic Education Certificate Examination (BECE) for School paper with faeces on herself until some angry teachers intervened.